THE KID by Kevin Lewis 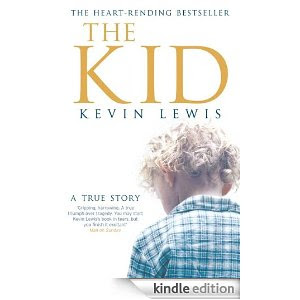 Ever since Dave Pelzer came out with 'A Child Called It' books with various abused themes seem to have filled the bookshelves.
So Kevin Lewis's 'The Kid' wouldn't have normally caught my attention. What set it apart from other books (at first) was that it was set in King Henry's Drive in the New Addington area of Croydon (South London). This was right on my doorstep.
Kevin Lewis suffered a childhood that was punctuated with violent assaults on him by his mother while his father hid in the kitchen listening to Elvis and drinking himself into oblivion.
Little wonder, then, that Kevin wet himself - and got beaten for it. Not just by his mother but by the school bullies. Still Kevin's mother was clever for she never marked his face and if anyone asked about the bruises on other parts of his body she had the ready explanation that Kevin was a clumsy kid who was always falling over.
Still the day came when Kevin had his head split open and then, and only then, did Social Services act.
For two years Kevin found peace in a children's home. The bed wetting stopped and he began to live a normal life. Guess what - Social Services sent him back home to live with his parents. Of course, Kevin's life returned to one of daily beatings. Social Services were still monitoring the situation but Kevin's mother knew, in advance, when they were coming which gave her time to allow Kevin's bruises to fade.
I could go on more in the same vein but Kevin, eventually, fights back. He has big ideas and finds himself placed with a family who encouraged him in his dreams. Unfortunately, his new family (who do show him love and affection) do not know how far he will go to realise his dreams. Not all of it is honest but after all he has gone through who can really blame him.
Then he meets his future wife, Jackie, who has to be a strong influence in his life. In fact this book was written for her so that she would understand him.

'The Kid' is not an easy read. Through a touch of luck Kevin Lewis did not go the way of Baby P or Victoria Colombierre. If Kevin was neglected by his parents then he was, also, neglected by Social Services.
At the end of 'The Kid Moves On' he says that he thinks that Social Services should be given a chance. Sorry, Social Services is not fit for purpose. They can go into court, say what they like and the Judge believes what they say. There are more kids in care today that need not be there while those that are in real need of the Social Services care are neglected.
More often than not Social Services, just as they did with Kevin Lewis, ask the abused child if they want to stay with their family in front of their abuser. What else is the child going to say? Kevin Lewis knew that if he asked to be taken away his mother would have beaten him up.

'The Kid' has been made into a movie and filmed in various locations around Croydon.
Although a good movie that sticks to the basics of the abuse it becomes apparent that the second half of the story veers away from the original.

Still the one thing that I noticed is that Croydon Social Services as depicted in the book is no different today.
Posted by Ray at 22:54