THE BURNING OF CROYDON 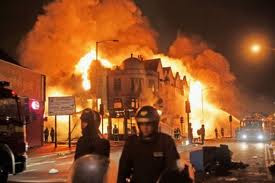 My daughter is a single parent with two children.
The pictures show the buildings on fire at the junction of London Road, Croydon with St.James Road and Sumner Road. The whole terrace of shops and flats were gutted in the riots.
At first, we were not aware of the problems along London Road as the news footage concentrated on the blaze of the furniture store at Reeves Corner. The store had been trading there for 150 years and, I suppose, a symbol of Croydon with a tram stop being named for it.
For a moment there was a snippet of another building on fire. It looked like the jewellers on the corner of our daughter's road. In fact, it was just that because a few minutes later our granddaughter was on the phone to tell us that everything was on fire. There were people running down the road but they could not see any police.
Despite the fires raging in London Road there was no attempt to evacuate the residential houses that backed on to it. In fact, the residents were told to stay in their homes.
Knowing how vulnerable my daughter was (she has tourettes and her daughter is autistic) my son attempted to go and get her away to safety but was turned back by the police.
The following day he did manage to slip through the cordon and get my daughter and her children to safety.
Luckily, the fires did not reach them and their home is ok. But the psychological scars still remain - it was an experience that they don't want to go through again.

Some time back - I think it may have been on James Reasoner's blog about the movie 'Harry Brown' - I said that the events at the end of the film hadn't yet happened but the time was very close. Seems, in some ways, to be prophetic words as last Sunday those rioting scenes became reality. For a while the streets of Croydon and the rest of London became no-go areas where rioters were allowed to loot.

As my kids say Croydon is not the same anymore.
Posted by Ray at 01:16

So glad to read your daughter and granddaughter are fine Ray. Hope they get over this horrifying experience asap. Best wishes to them both.

I saw some of the news coverage of the hoodlums burning buildings, etc, in London and they mentioned other cities were having the same problems.
I'm glad that your daughter and family are ok and hope the houses you mentioned didn't get set ablaze. We are hoping the same thing doesn't happen here in the US.

Happy to see everyone safe. I've caught a bit on the news here in the States. It all sounds terrible.

I can't imagine what folks are going through. Living in a small town, we don't get stuff like this.

We'll remember everyone in our prayers.