THE LAST RITES OF RANSOM PRIDE 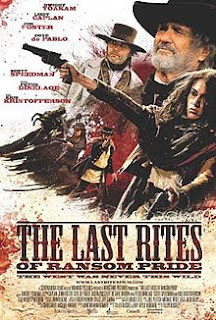 The story is a good one. Juliette Flowers (Caplan) decides to bring her lover's, Ranson Pride (Speedman)body back to bury him at his mother's side. A thought that does not sit well with his shady father, Reverend Pride (Yoakham). Old friend Kris Kristofferson sends a couple of hired guns to stop Juliette who has enlisted the help of Ransom's brother Champ (Jon Foster).
Ransom's body is held for - er - ransom by a witch, Bruja (Cote de Pablo)who sends out her own minions to stop Juliette.
Along the way Juliette and Champ forge a relationship. They meet an array of characters who come to their aid. A dwarf weilding a pair of sawn down shotguns, Siamese twins and a portly, army sergeant.

With a good, strong cast and a storyline that should have put a good western into the mainstream, I should be rooting for it.
The constant flash one frame replays of the key gunfights, fast forward motion from day to night, and the jerky opening credits - all in all should contain a health warning for anyone likely to experience an epileptic fit. Much of the 78 minute running time is unwatchable. And there are other things like Ransom Pride's modern gun, the army sergeants motorcycle and sidecar, and the Reverend's motor car (ok, this I can take as steam cars existed back then but still looked out of place).

In one breath this movie goes from good to bad and made ugly by the cinematography.
Posted by Ray at 13:00

Nice review. I wrote one much like it a few months ago at my own blog. Good to see that I am not the only one perplexed by it.