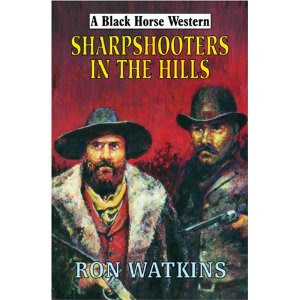 It is with great sadness that I have learned of the death of fellow Black Horse Western writer Ron Watkins.

Ron began his writing career with detective novels the first being 'Death Draws The Curtain' in 1973.
Ron was born in 1930 and educated at Leominster Grammer school. He worked as a librarian with Rhondda Borough Council rising to the position of Deputy County Librarian with Mid-Glamorgan County Council. He was also a reader for a London publisher and President of the Bridgend Writers Circle.
His first Black Horse Western 'Lowry's Revenge' was published in 1993 and was the first of his novels that I read. The hero was an actor and began with a scene from Shakespeare's 'King Lear'.
With contributions to 'Writing Magazine' and the production of a play 'Sextet' Ron Watkins was always the versatile writer.

Broken Trails sends condolences to Ron's family. His talent is something that will be missed.
Posted by Ray at 01:27

My commiserations too. A prolific and popular writer. I still have a cutting from the Dec 2004 Writing Magazine about his BHWs.