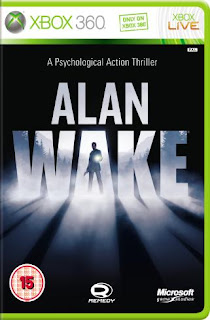 14th May 2010 - a day that will live in - well, something or other.
But it has been one hell of a long wait for this console game to hit the - well, the console.
I seem to recall this title going around back to about 2005. It never materialised.
Even the promised 2010 release seemed to be going backwards. First it was going to be April and then back to the 21st May but, my guess, is that with the release of 'Red Dead Redemption' on the same day it was rushed to a week earlier.
So was all the hype worth the wait?
I do believe so.
It looks good and feels good - and a good game for writers.
That's the plotline - a writer wakes up in a lonely cabin in the woods only to find that he is a character from one of his own books that he has yet to write.
Confused? Well, there is a lot of time-shifting that the player has to keep up with but there you go.
Billed as a psychological thriller this has undertones of Stephen King. Yes, there are hints of 'Bag Of Bones' (the opening is a clue) and 'The Dark Half'.
One does go along with the media's idea that this is one of those 'must have' games and will, no doubt, top the charts for weeks to come.
Apart from the standard edition there is a Limited Edition that comes with a host of goodies. A Bonus disc that shows how the game was made. A CD Soundtrack and a dashboard piece of wallpaper. Also, the book of the game that makes for interesting reading.
All this inside a book cover.
As you can guess I have the Limited Edition and I think that with all the extras it proved value for money.
Available only on the XBox 360.

One thing to add. Many games have good soundtracks - 'Silent Hill' and 'Red Dead Revolver' come to mind. A soundtrack album issued with the game would be a good idea.
Posted by Ray at 19:05

I'm not a gamer but I gotta admit that's an interesting plot.

I'm intrigued by this game. Sounds really cool! Thanks! Do you know where I can purchase this? Here's my website: http://www.puritandownloads.com/swrb/categories/Jonathan-Edwards/