WITHOUT WARNING by John Birmingham 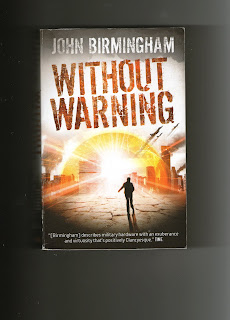 Without Warning is an alternative history style story that opens on 14th March 2003 where the US Army is grouped in Kuwait poised to invade Iraq.
Then, without warning, the USA, parts of Canada, Mexico and Cuba just cease to exist as a wave of energy settles over the continent wiping out all forms of life.
In Seattle, city engineer James Kipper and his family struggle with what has happened; questioning why this small section of America still survives.
In Paris, covert agent Caitlin Monroe, is close to cracking a terrorist cell.
In the Middle East correspondent Bret Melton is preparing to cover the invasion.
Admiral James Ritchie based in Honolulu and General Tusk Musso stationed at Guantanamo Bay try to hash out what has happened. With the Cubans taking the vanguard an attempt is made to discover what the anomaly is - but the researchers are swallowed up and disappear.
Out at sea is the gunner/drug runner Pete Holder and his female crew of Lady Julianne Balwyn and the vivacious Fifi.
While the emphasis lies with the threads of these characters they are seen against a backdrop of world changing events. While some countries take stock and re-evaluate their politics and their borders others go on the rampage.
Without a central command the Americans continue with the invasion of Iraq. At the same time Syria and Iran join forces with the Iraqis. Israel, no longer under any restraints unleashes Armageddon on all it's enemies - completely forgetting about simple things like wind direction and radiation clouds.
It is the individual storylines that drives this novel along - it is 560 pages long - but there is a lot of action sequences from shoot outs, car chases, and a boat chase.

The book has received mixed reviews with most sticking to something like middle ground.
One reviewer was disappointed that there was no scientific investigation into the energy wave. Probably, skipped the bit where it was discovered that that the edges 'billowed like the wind in the sails' that made it a bit impossible to get near. But, then again, maybe he just hadn't read John Wyndham's 'The Midwich Cuckoos' - there was no scientific investigation into the cloud.
What I got from that was that something unexplainable had happened - a statement of fact - and the result was chaos.

Still, this is the first book in a trilogy written by Australian author John Birmingham. It is, also, a scene setter for the next two books in the series, 'After America' and 'Angels Of Vengeance'.
My own first impression was a good one and I'm looking forward to the next instalment.
Posted by Ray at 15:16