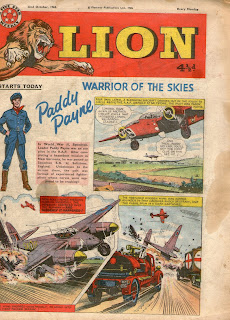 The Lion comic was published by Fleetway Publications on the 23rd February 1952 and aimed at boys. Also, there to compete with the Eagle comic. On the front cover at that time was another pilot of the future - Captain Condor.  Though in the above 1960 comic Condor looks to have become a double for his rival Dan Dare.
As an aside there is an advert inside the issue for 22nd October 1960 for Rowntree's Liquorice Gums - 16 gums for 3d. So a trip to the newsagents would cost 3d plus two comics (Lion and Eagle) costing a total of 9d. All that for a shilling out of my pocket money of half a crown (2s 6d old money).
Over the years many memorable characters have emerged from these pages. Along with Captain Condor there has been Zip Nolan, Robot Archie and The Spider.
Of them all Paddy Payne - Warrior of the Skies held centre stage from the moment that he took over the front page from 1959 until 9th February 1964 issue. After that the front cover was devoted to 'Badges Of The Brave' depicting various regiments that had distinguished themselves through history.
The Paddy Payne strips were created by Joe Colquhoun (of 'Charley's War' fame) but I have never been able to track down the writers. Though Steve Holland (Bear Alley blog) discovered that some of the stories from 1963/64 were penned by Frederick E. Smith (633 Squadron author). Possibly could have been the author of the story that began in the pictured cover above. Secret squadron formed with pilots close to cracking up; Payne's job is to motivate them into flying a decoy mission on a Rhine dam - the aircraft used are Mosquitos.
Paddy Payne was the universal warrior of the skies though. Not just the usual fighter pilot tales but Paddy could work just as well behind enemy lines as he did from the front. He took on the Germans, Italians and the Japanese. In the latter he was taken prisoner and escaped.
In 1969 the two rivals Lion and Eagle merged but the age of the comic was taking a downward spiral.
Mergers with Valiant and the later rebranding of titles as Battle Picture Weekly in the mid-70s were just a part of that demise.
On a personal note - while nostalgia may be a word to describe it - I still love those old comics. The stories were of every genre (male orientated genre admittedly) and it was that sort of mix that influenced what I read. It influenced play and stimulated the imagination.
Now where can I find some Liquorish Gums.

The cover reproduced above is from my own collection.

Fantastic trip down memory lane, Ray! Wasn't Robot Archie in this comic - and a Viking guy? Thanks for giving me a glimpse of Paddy Payne, I'd forgotten about him!