Just sad that another talented actor died today.
Paul Newman was always watchable whether he was playing Fast Eddie Felson in 'The Hustler' or Butch Cassidy.
Favourite films: 'The Hustler'; 'Hombre'; 'Hud'; 'Cool Hand Luke' and 'Cat On A Hot Tin Roof'.
Rest in peace, Paul, you'll be missed.
Posted by Ray at 17:28 2 comments:

Rayne is half human and half vampire - a beautiful but brutal vampire slayer.
In this movie by Uwe Boll the town of Deliverance has been taken over by Billy The Kid and his bunch of vampire outlaws. Billy (played Zack Ward) plans to populate the Wild West with the wildest bunch of killers.
Rayne (Natassia Malthe) sets out with Pat Garrett (Michael Pare) to bring law and order back to the town.
Bloodrayne is based on the computer game - but though I enjoyed the first Bloodrayne movie mainly because it included elements of the game.
However, in number 2, and setting the story in the west I wasn't sure of I was watching a spoof. Natassia Malthe certainly has presence but she is not Sharon Stone.
At the end of the movie Garrett asks Rayne where she was going and she replies: 'Tombstone. I hear there's a bunch of vampires down there called the Clantons.' Garrett replies: 'I think you'll find that a feller called Wyatt Earp has that situation under control'.
Yeah - well.
The director Uwe Boll seems to have a habit of turning computer games into movies - good, bad and indifferant. Probably, in time, he will have a cult following.
On the plus side was the sountrack, obviously influenced by Ennio Morricone, written by Jessica De Rooij.
Not on my recommend list - but may be of interest to someone.
Posted by Ray at 22:14 3 comments: 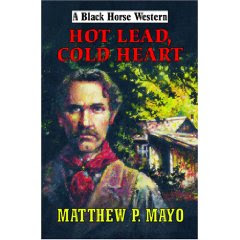 This is the cover of Matthew P. Mayo's new book which will be published on the 31st October 2008 by Robert Hale's Black Horse Western imprint.
This is his third western novel and I am looking forward to it.
His first book - 'WINTER'S WAR' - (published in 2007) left me very impressed. From the opening scenes of almost everyday family bliss that is shattered by an unnamed stranger I was drawn into Niall Winter's quest to save his wife. A quest that seems thwarted as a raging blizzard and deep snow cover any clues.
Into this mix are a couple of nomadic Basque gypsies that I found to be unusual as it seems that a lot of writers forget that these people existed.
For the gypsies and Niall Winter's this is a story about survival against the forces of nature as well as man.
In his second novel, published earlier this year, Matthew P Mayo adopts the first person style of narrative. 'WRONG TOWN' left me stunned and has to be ranked in my own personal top 10 of westerns that I have read. The hero, who goes by the name of Roamer, is a bit of an outcast. He looks as though his face should appear on 'Wanted' posters. In reality he is just a loner who survives on his own wits.
The opening chapter has Roamer fighting for his life against a grizzly bear - the read has an authentic feel to it as though the writer had lived through such an ordeal. If this wasn't enough and with Roamer trapped beneath the bear - he is robbed. And that is just the start of his problems for by the time he gets into town he is, promptly, arrested by the local lawman for murder.
This book reads like a movie and is gripping from start to finish.
Matthew P. Mayo also editted an anthology of western short stories by fellow Black Horse Western writers titled 'WHERE LEGENDS RIDE' (2007 - Express Westerns) which includes his own 'SNOWS OF MONTANA'. The anthology includes stories by Chuck Tyrell, Gillian F. Taylor,
Jack Giles, Duane Spurlock, Lance Howard, Ross Morton, Ian J Parnham, Derek Rutherford, Roy Carlton, Ben Bridges, Kit Churchill, P. McCormac and Lee Pierce.
You can visit Matt at www.matthewmayo.com
Posted by Ray at 10:40 4 comments: 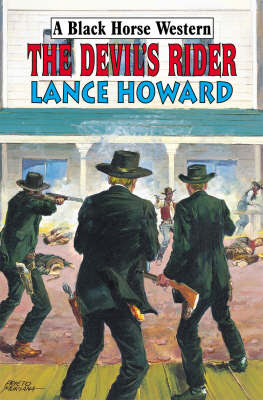 
From the opening of this book the reader sees into the mind of Jeremy Trask as he and three other gang members prepare to slaughter the inhabitants of the town of Baton Ridge. From the start Trask is out for revenge.
The book centres around four characters - Trask, himself and Spring Treller the only survivor of the massacre; Jim Darrow who is filled with guilt that he had allowed his brother to be killed by Trask and Trallie Hicks - one of the gang.
Lance Howard builds his characters and breathes life into them.
However, this is a story that has a depth that makes the reader think about the effects of the story.
I would recommend this book.

The first Lance Howard novel that I read was 'THE WIDOW MAKER' (1997 - BHW). It was differant to anything that I had read. There was the outlaw leader, Brace Carrigan, who led a bunch of female outlaws who only shot men and made widows of their wives.
This book is memorable to me for the darker shades that occur when a Chinese woman treats the manhunter, Steve Matthews', wounds after he has been attacked by 'indians'. His delirium dreams are something akin to a psychadelic trip.

Lance Howard also writes horror stories under the name of Howard Hopkins (who's latest book is The Chloe Files' details are on his Dark Bits blog). Sometimes there is a cross over into his westerns giving them either a dark flavour or a supernatural feel as in 'THE SILVER-MINE SPOOK' (2003 - BHW) for example.

This movie (available on DVD) is set in and around North London's - The Ace Cafe.

The film deals with the breakdown of the too young to get married couple played by Colin Campbell (Reggie) and (Dot) Rita Tushingham. Into the mix comes Pete, played by Dudley Sutton, who moves in.

For a social comment on the life of The Rocker generation this film comes close to reality. Many of the extras were regulars at The Ace.

What makes this film a stand out for the time is that it handled the topic of homosexuality - quite a breakthrough - and is handled well.

Not just a movie for bike buffs (who will pick up the point that an Aerial can't outrace a 'Bonnie'. Norton Dominator - yes but an Aerial - no way.) but for those interested in life back in the sixties.

Rita Tushingham was there for the re-opening of The Ace and Colin Campbell still drops by on a Friday night.

Just out on DVD .
The film takes place on the 11th September 1857 when 120 men, women and children were massacred at Mountain Meadow.
The film takes a gentle tone from the start with the settlers travelling from Arkansas to California seeking a place to rest at Mountain Meadows. They seek permission to stay for a couple of weeks and is, readily, given.
What follows is a portrayal of the life of the Christian settlers set against that of the Mormons.
Against this background is a Romeo and Juliet tale of a settler girl and a Mormon boy played by Trent Ford and Tamara Hope.
There are one or two gruesome moments that occur on the Mormon side - like how an adulterer is punished.
To a degree it is that just hints at what is to come and the massacre itself is not for the sqeamish.
Jon Voight is brilliant as the Mormon leader - a very convincing performance. Probably one of his best.
Terence Stamp portrays Brigham Young and his dismissal of the massacre and his deniability came across like a war criminal.
For those that like a good piece of historical westerns - then it's money well spent.
The only thing that bothered me was the disappearance of one of the female characters after the first fifteen minutes. That she wore pants and carried a gun bothered the Mormons and with that point made the woman in question vanished.
Posted by Ray at 16:26 1 comment: 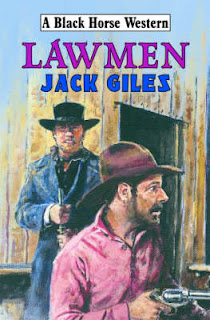 This is the latest Jack Giles novel that was published in June this year.

Sam is the Marshall and Chris his deputy who attempt to discover who killed Chris's father.

While that is the surface story there are other components to the book that make it character driven.

This is my first book in 9 years - the reason for that will become apparent in time. 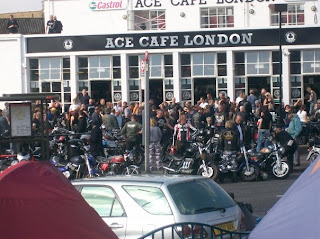 This is The Ace Cafe - London - the photo was taken on 13th September 2008.
The Ace celebrates it's 30th Anniversary.
The Ace opened in 1938 as a truck stop cafe and remained that way until the 1960s when it gained a new reputation with the arrival of The Rockers.
Not a bad reputation - but it took on an iconic status that, today, is worldwide.
When it closed in the late 60s it was as though a line had been drawn under an era. For years it became various things including a tyre store. That was until Mark Wilsmore came on to the scene with a vision.
The Ace re-opened in 2001 and I was there for that. Just exhilerating to see the place restored - the live rock n roll bands added to a nostalgic atmosphere. And to see the bass player from Crazy Jay & The Partytimers standing on his bass perched on the edge of the roof. The place went wild.
Nostalgia is never a bad thing. For The Ace was part of my youth and the same goes for many of those who were there.
The Ace now - as then - is a place where people with the same interests come together.
Posted by Ray at 11:59 1 comment: