COLETTE: YOU DON'T HAVE TO SAY YOU LOVE ME by Abigail Summer 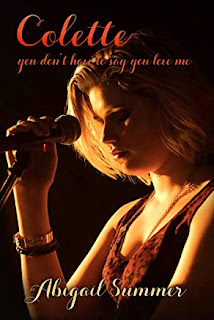 Having grown up during the 1960s this book had a certain appeal - after all it came with it's own soundtrack. And a subject that I could relate to but not in the way that you might think.

In 1961 I was 16 years of age when something reared it's head - something that you would think that, in this day and age, was new. Well, there's nothing new under the sun. Back then a newspaper 'outed' the model and actress April Ashley as transgender. She had been born a man who had served in the Merchant Navy but had undergone traumatic sex reassignment surgery. Despite this the law stated that she was still a man.

Transgender facts were hard to come by in those days yet the fact that a man (or a woman for that matter) could feel that they were born in the wrong body was not that hard to figure out.

This book was mentioned in the Felixstowe Scribblers' newsletter. Though it wasn't my usual type of reading I was soon out of my comfort zone.

Colette centres around a 19 year old boat builder called Colin who is offered a 'dream' job on Guernsey and soon becomes involved with Leanne (one of the owners) who draws out the real person that he is - Colette. Emotions run deep as there is conflict with others as well as within herself - acceptance comes from within not just the reactions of others.

The book is well written and flows easily carrying the reader through Colette's eventual emergence and belief in herself.

However, it is carries the label of an 'emotional transgender' story which it is but (my opinion) is a touch off putting. Reality is boy meets girl, girl meets boy and another boy, etc etc. In other words a romantic novel with underlying tones.

Thanks to my youth I discovered that this book read like a good old fashioned novel. And roll on the sequel which is due about Christmastime