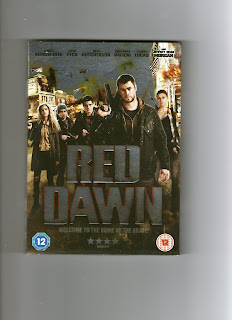 This 2012 movie is directed by Don Bradley based on a screenplay by Jeremy Passmore and Carl Ellesworth (which is based on the original Kevin Reynolds and John Milius script).

Red Dawn is a re-make of the original Patrick Swayze and Charlie Sheen movie.

Chris Hemsworth (Thor) plays a US Marine, Jed Eckert, who is home on leave while Josh Peck plays his brother, Matt. The relationship between the brothers is strained as Matt believes that Jed abandoned the family after their mother's death.
The movie starts with Matt failing to score the winning points that would see the college football team, Wolverines, with the football match. The after match party is brought to an abrupt end as a power failure shuts everything down.
Come the dawn, the sky over Spokane, Washington is full with parachutes as North Korean forces invade the American Pacific states.
The premise is that one day the North Koreans will do exactly what they threaten - the rest of the world might just dismiss it all as another show of sabre-rattling. They attack while the rest of the world are dealing with their own problems. A recession that leaves the US vulnerable with forces engaged in other theatres over seas. The EU in disarray over financial problems.
America is ripe for invasion - the Koreans to the west and the Russians to the East Coast.
The Eckert boys and a bunch of college kids manage to escape but are unable to rescue Matt's girlfriend, Erica. They are joined by a couple from San Diego who were on their way home and Toni, an old friend of Jed's.
Under Jed's leadership the Wolverines become the by-word for resistance. Matt, doesn't take to Jed being the leader and puts everyone in danger when he ignores orders to do his own thing by rescuing Erica during a daring raid - actions that causes the deaths of others.
This is a movie that has a logical script, good if clichéd characters and well directed action scenes that drive this movie on.
Critics may have hacked it to death but this is a movie that grossed close to $49 million.

Now for the stuff that the critics and reviewers didn't mention - because, I don't think that this is just a remake.
The moment that the montage began at the beginning of the movie I smiled. I had seen it before. With a couple of tweaks the montage was almost the same as that which begins the video game 'Homefront'.
'Homefront' is scripted by John Milius who directed the original 'Red Dawn'.
'Homefront:The Voice Of Freeeom' was the companion novel written by Raymond Benson and John Milius.
In the 'Red Dawn' re-make there is a clear reference to another video game 'Call Of Duty' which showed a small town in America being invaded by Russian paratroopers.
As in 'Call Of Duty' so the Russians have invaded the Eastern seaboard as per 'Red Dawn' re-make.
To my mind 'Red Dawn' is not just a remake but a reworking to make a movie that should have been called 'Homefront: Red Dawn' or the other way round. Whatever it fits into the mould as it were.

Ah...yeah...interesting that The Rolling Stones' AFTERMATH had two different (at least) fiddled-with covers depending on which country one found it in.