THE FEUD by Amelia Bean 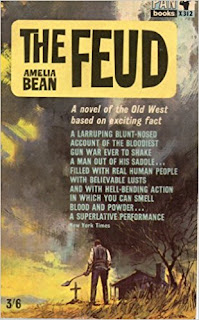 'The Feud' tells the story of the Graham-Tewkesbury war that took place in Arizona's Tonto Basin in the 1880s. It follows Edwin 'Breed' Tewkesbury who was the last man standing.

The story opens with the death of Edwin's sister, Josie who was married to George Graham. Edwin finds his sister emaciated and struggling to keep her new born baby alive. As her brother tries to help her she dies in his arms but not before she has told him what was going on. Edwin and Josie are half-breeds - their mother was an Apache who died shortly after her daughter was born. Josie's son showed more of his Native American side than the white side. After Edwin has buried his sister George Graham turns up - and lies about how long he has been away. When told that he is a liar George goes for his gun - only Edwin moves faster and takes George Graham down to ground level and strangles him with his own bare hands. He, then, drags the body into the house and sets it alight.

Although there are suspicions and accusations rife there is no proof that George Graham was murdered but it is there smouldering beneath the surface. All it would take was one spark to reignite the need for a vendetta.

One thing that would never be tolerated in cattle country was the introduction of sheep - and that was what the Tewkesbury clan did. It became a bloody battle that was destined to destroy both families and leave Edwin Tewkesbury as the sole male survivor.

Amelia Bean drew on historical references in order to write this fictional account. Her inspiration came from a magazine article by William MacLeod Raine who confessed that he had not been anywhere near where the events had taken place. In 1957 Amelia did visit the site of the feud to the point that she stood on the very spot where Sheriff Mulvenon took down Charley Blevins and Jack Graham with his shotgun. However, she discovered that the whole story was still hotly disputed and the subject of rumour and controversy.

Not much is known about (Myrtle) Amelia Bean except that she was born in Utah, educated in Salt Lake City and lived in California with her husband and son. Between 1957 and 1967 she wrote three books - the first was 'The Vengeance Trail' (U.S. title 'The Fancher Train') and the last 'A Time Of Outrage' about the Lincoln County War - with 'The Feud' in the middle.

Apart from this book I haven't read anything about this feud - but Zane Grey used the back story for his novel 'To The Last Man' but changed the names. It was filmed with Randolph Scott. In 1992 there was a 'Gunsmoke' movie, also, called 'To The Last Man' where Matt Dillon gets involved in the feud.
Tabor Evans 'Longarm'  gets involved in the feud ( Longarm and the Pleasant Valley War). Another novel that references the Tewkesbury - Graham war is Chuck Tyrell's 'Revenge At Wolf Mountain'.

'The Feud' was the first western that I had read that had been written by a female western writer. Although there is a 'romantic interest' in the story that involves Edwin and his step-sister, Stella it does not intrude into the main thrust of the book.

Edwin Tewkesbury became the deputy sheriff of Gila County, Arizona and died in 1902. He was survived by his wife and four children.
Posted by Ray at 23:17

Amelia Beans novel is just that and no more.It can`t be called historical fiction. Just B.S.!