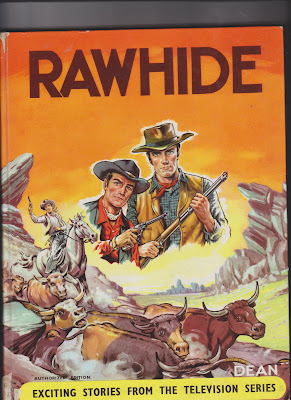 Every western had an annual and 'Rawhide' was no exception.
They ran from 1959 to 1964 or 5. The one pictured is 1960 and I, also, have the 1961 annual.
Published by Dean & Sons Ltd the stories were written by Bill Pembury with illustrations by Leo Rawlings. These were black and white with either red, orange, green or blue colouring.
The stories reflect the tv series in a way that they could have made for another season in their own right.
The first story 'The Brogan Brothers' has Gil Favor and Rowdy Yates riding into the town of Pittsville to find three drovers to replace a trio of men who have become sick. They are directed, amidst a load of laughter, to a shack at the end of town where three Irish Brogan brothers, Paddy, Pat and Patrick, live. They hire on but are found to be on the idle side except when they want to enjoy a fight.
Determined to make men out of this disruptive trio he makes them ride right swing through the spooky Quanton's Canyon - a place where movement sets up weird echoes that can spook the cattle.
Enough to say that Gil Favor's ploy pays off.

But the annuals did not just tell stories. There were factual stops along the way with practical pieces about the flora and fauna to be found; the difficulties as well as the fun to be had along the trail and (in the 1961 annual) the use of sign language.

Who Bill Pembury was - I don't know except that he did the 'Tenderfoot' (Sugarfoot in the US) annuals.
Posted by Ray at 17:56