THE BALLAD OF DELTA ROSE by Jack Martin 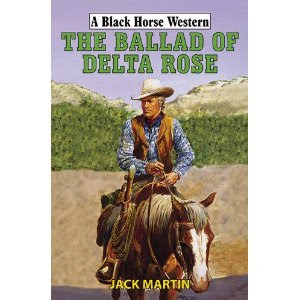 Delta Rose and his partner, Etta James, built up a small ranch together but the urge of wanderlust and the lure of making quick money to give them a life of luxury drew Delta away.
Twenty years later and he returns. The ranch is now prosperous and foreman Steve Carter is firmly in a precarious driving seat. He has high hopes for something to happen between him and Etta but Delta's arrival seems to be about to dash his hopes.
But not all is as it seems. Delta has a problem, a bullet lodged close to his heart put there by an English gambler who accused him of cheating.
Delta is coming home to say sorry and to die.
But he has a son he knows nothing about. Matt James is a bit of a chip off the old block and is on the run for a killing that he didn't do and a robbery that he did. After him is Maxwell King, a powerful rancher, whose money he stole and Sheriff Jake Masters with a posse.
Once again Jack Martin takes his ingredients and turns them into a tasty treat. Incident piles upon incident that gathers speed until justice is seen to be done.
If you haven't read Jack Martin then you have missed a treat.

And there is more from Jack Martin at the Pattinase blog - a link to which can be found in the side panel.

The Ballad of Delta Rose is a Black Horse Western that, officially, comes out at the end of July but can be purchased through the usual outlets.
Posted by Ray at 15:47

Thanks for your kind words. Glad you enjoyed it. Jack Martin

My copy is working it's way from across the ocean. Looking forward to it.

I will be reading.