RIDERS OF THE RANGE 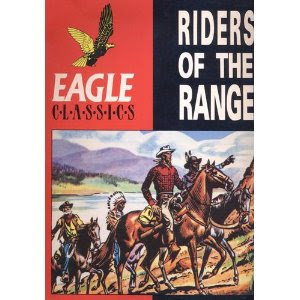 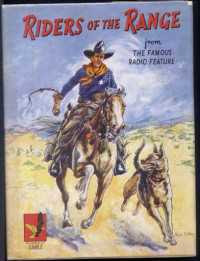 In 1949 the BBC made a serious attempt to bring a British western series to radio. This was the brainchild of Charles Chilton was would be instumental in creating 90 episodes spread over six series that ran from 1949 to 1953.
Using actual documents and diaries of the time Charles Chilton created a real world for Jeff Arnold (Paul Carpenter), the old timer Luke (Charles Irwin) and the daughter of the owner of the 6T6 Ranch, Mary,(Corrine Carr)and the dog 'Rustler' to inhabit.
The series covered the opening of the Chisholm Trail and the building of the Atcheson,Topeka and Santa Fe and the Union Pacific Railroads. Real characters turned up like Billy The Kid and Jesse James.
As a jazz musician himself, Charles Chilton knew the value of music and the series contained musical interludes.
In 1950 the Eagle comic approached the BBC for permission to create a comic strip version of 'Riders Of The Range'. Charles Chilton became involved with the stories for the strips and remained with there until the early sixties.
During the years of involvement with this series Charles Chilton became something of an authority on the history of the west. In 1961 he published a book called 'The Book Of The West' that won him the 1963 Western Heritage Award For Juvenile Books.
Unfortunately, none of the radio episodes exist today but I heard most of them when I was a child.
When the radio series of 'Riders Of The Range' ended in September 1953 Charles Chilton already had something new to take its place. He would take us forward to November, 1965 with a new hero, Jet Morgan, who would take us on a 'Journey Into Space'.
Posted by Ray at 23:08

Ah, the memories! The only physical memento I have is an Eagle-licensed Riders of the Range bagatelle game, complete in its now slightly worn blue and white cardboard box. Anyone remember these? I think there was a Dan Dare one, too.

The signature tune was Tumbling Tumbleweeds.