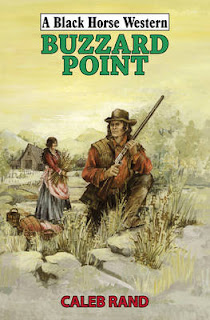 After shooting his best friend Jesse Tripp is forced to go on the run.
Two years later Jesse escapes from an irate husband and climbs aboard a cattle truck. Events that set him on a reluctant return to his home in Wickett, Texas.
Here he learns that his father is dead and that he has a son by one of the servants. His brother has taken over the ranch which has grown in size and married Jesse's girlfriend Holly.
Jesse has to weigh up whether to find out what lay behind his father's death or just move on. However the law, in the shape of a devious sheriff Turgoose, makes his mind up for him.
Through all the twists and turns of this story where not all is as it seems Jesse Tripp comes close to death before unravelling family secrets.

Caleb Rand has written yet another good page turner full of characters and a plot that keeps the reader hooked.
Buzzard Point is published by Robert Hale's Black Horse Western brand and is due for publication on 30th June.
Posted by Ray at 13:07

I'll look forward to getting this.

Good to see them using a bit more colour in their cover images.

Probably the fastest I've read a book. Arrived 9:00am this morning and finished it by half 12.