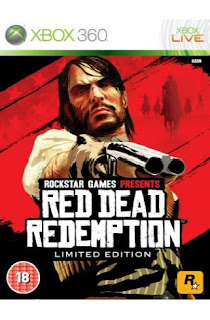 If anyone thought that Red Dead Redemption was going to be Grand Theft Auto with horses then they were way, way out.
Nor have the developers at Rockstar repeated the formula used with the original 'Red Dead Revolver'.
When I first saw the early stills and trailer I thought that the CGI cut scenes looked good. And cut scenes always come across that way and gameplay tends towards the cartoonish. With Red Dead Redemption this is not the case - the gameplay and the CGI work together producing great graphics.
Nor is this game of the usual shoot 'em up variety. No, the beauty lies in the detail. Simple things that add reality like hitching and un-hitching your horse. Sometimes you have to saddle the horse instead of just jumping on it as in other games. You have to draw the gun or rifle before you can use it and take time out to reload.
The story itself is in traditional mode.
When federal agents threaten his family, former outlaw John Marston is forced to pick up his guns again and hunt down his former friends.
Not so easy as John Marston confronts his former friend and gang leader Bill Williamson. Marston tries to reason but Williamson guns him down. However, he is rescued by local rancher Bonnie McFarlane who helps him to regain his strength. Bonnie has her own problems as her ranch has been targetted by rustlers.
Now play on......
The game came out today and some of the on-liners that I know have given the game the thumbs up.
Posted by Ray at 01:28

This looks good. I've seen the ads on TV. Unfortunately, I don't own a game system and it doesn't seem to be available for PCs at this time. Maybe later.