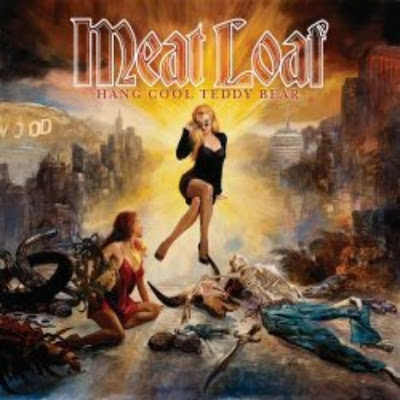 Hollywood scriptwriter and director Kilian Kerwin wrote a short story called 'Hang Cool Teddy Bear' set against the background of the war in Afghanistan. The hero of the story is badly wounded and the only hope of rescue is if he can reach a nearby ridge. Somehow he summons up both the courage and the strength to do it but on reaching the goal has no strength to cry out. After firing a shot in the air he collapses and, in episodic form, his life with a girl called Jenny flashes through his mind.
Taking this story as a basis Meatloaf has made an impressive musical interpretation.
From the moment that the explosive pounding percussion opens the first track 'Peace On Earth' you get caught up in the futility of war and a soldier's wish to just go home.
On this album Meatloaf is joined by a host of stars - Justin Hawkins (The Darkness) who, also, co-wrote two of the songs; Steve Vai and Brian May. Jack Black duets on 'Like A Rose' and there is also a welcome re-union with Patti Russo. The biggest surprise comes with Meatloaf's duet with Kara Dioguardi on 'If I Can't Have You' where the pianist is the actor Hugh Laurie.
All in all I found this album up there with 'Bat Out Of Hell' and I can see this as a great concept for a live show.
While the album can stand on it's own two feet it was good to read the source material which can be found on line.
An album to 'hang cool' with.
Posted by Ray at 07:13

Impressive, for me, that Steve Vai is on board. Insanely talented guitarist.