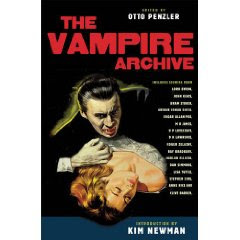 The Vampire, according to the editor of The Vampire Archive, Otto Penzler, has been a part of the myths and legends since the Biblical Lilith. Even Greek mythology has the blood sucking daughters of Hecate.
Yet, the vampire in literature didn't really make an appearance until Dr John Polidori's 'The Vampyre' in 1816. And this was written in response to a challenge by Lord Byron after reading the vampire poem 'Cristabel' by Coleridge to the Shelleys and Polidori. As is known Mary Shelley came up trumps with 'Frankenstein' and Poliori with his piece.
The Vampire Archive is the combination of two books that contain short stories that pre-date Bram Stoker's 'Dracula' and continues into those stories that have been written since right up to those published recently. Authors like Mary Cholmondeley, Sir Arthur Conan-Doyle, Ray Bradbury, Ed Gorman, Roger Zelazny, Richard Laymon - the list goes on.
1,214 pages of blood tingling suspense and stories not to be read alone at midnight.
Well, that's never applied to me. Though there is a mix here as the odd vampire poem is to be found here, too.
At the end of the book there is a bibliography, compiled by Daniel Seitler, of every vampire short story and novel that has been written. Included are four entries from the Razored Zen blogger Charles A. Gramlich, Marilyn Ross's 'Barnabus Collins' Dark Shadows stories and the vampire western 'The Dark Riders' by Howard Hopkins aka Black Horse Western writer Lance Howard.
Anyone who wants to escape the 'Twilight' world of 'True Blood' that just show that fangs ain't what they used t'be - then The Vampire Archive will do the trick.
Posted by Ray at 23:59

Good to see a review of this book - I was curious about his vampire book. And it's terrific that Charles' and Howard's stories are listed in the bibliography.

I appreciate Mr. Penzler compiled collections like THE VAMPIRE ARCHIE. He has the eye to separate the wheat from the chaff. Every story a winner.

I've started reading THE SECRET HISTORY OF VAMPIRES (edited by Darrell Schweitzer) and can recommend this one as well.

Another good review, thanks, Ray. A new book about vampire literature is always welcome, although inevitably for any collector much of the material will be repeated. Vampyres by Christopher Frayling (1978), The Penguin Book of Vampire Stories edited by Alan Ryan (1987) and Dracula’s Brood, ‘neglected vampire classics selected by Richard Dalby’ (1987), to name but a few.

As for listing all the vampire short stories and novels, that’s quite an achievement as there are lots!

These collections are necessary, naturally, to keep abreast of the new additions to the corpus. A pity, perhaps, that the newer writers’ stories – or excerpts of their books – aren’t featured instead of the older ones being repeated yet again. (Of course, the publishers probably won't go that route, as they want 'big names' on the cover...
Nik