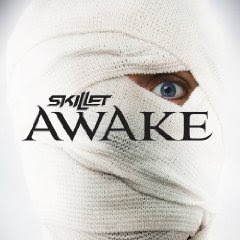 I had never heard of Skillet before the Smackdown vs Raw 2010 console game came out.
Two of the tracks on that game were 'Hero' and 'Monster'. Themes used by the WWE for their pay per views - 'Monster' being used for 'Hell In A Cell' and 'Hero' the theme for both 'Tribute To The Troops' and the 2010 'Royal Rumble'.

Skillet were formed back in 1996 in Memphis, Tennessee by John Cooper (lead vocals and bass guitar). Later he was joined by his wife, Korey (keyboards and rhythem guitar) and lead guitar Ben Kasica. Jen Ledger is the drummer and vocals and completes the current line up.
Over the past 13 years the music has covered many of the music genres including hard rock, Industrial rock and symphonic rock.
Two of their albums 'Collide' and 'Comatose' have been Grammy nominated.

'Awake' is classed as old school prog rock with added styles.
The opening track is 'Hero' - and a good one, too, as it makes for one of those stop what you're doing and listen for a while. 'Monster' is darker in both tone and colour and the mood continues into 'Don't Wake Me'. This is deceptive as the mood changes with 'Awake And Alive'a song that does exactly what the title implies.
This album is a rareity in that there is not a dud track on it.

If you like Linkin Park (and I don't), Puddle of Mud or Evanescence then you should take to this Skillet album.

Jen Ledger had a song to herself on an earlier Skillet 'Comatose' tour and her vocals on the 'Awake' album are absolutely excellent. Hint to Skillet - Jen should have more to do on next album. Both Jen Ledger and John Cooper's voices complement each other.

On first listening to this album I had no idea of the band's history except that it had been a No.1 album on the Billboard Chart. What I didn't know was that this was a Christian rock band.
I knew that Christian bands were around and covered every kind of genre from heavy metal to rap and many that I had sampled were so in your face with the 'important message'.
So, it was great to come across a band that didn't do that. Sure, the 'message' is there but oh, so subtle. Read the lyrics and you'll see what I mean.

'Awake' has been enough for me to go out looking for more of their albums. The music works on several levels so that the listener draws from it what they want to.
Posted by Ray at 16:11