Friday's Forgotten Book: The Night Of The Tiger by Al Dewlen 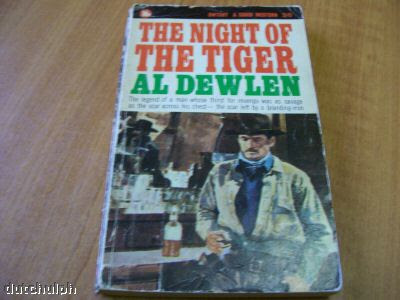 THE NIGHT OF THE TIGER
by
Al Dewlen
Published around 1957
As far as I know this was the only western that Al Dewlen wrote.
When Julius Rupp married his wife Jessie and set up home in her aunt's house Rupps life became hell. The aunt could never understand why her neice had married a man who would amount to nothing. Rupp walks out on his wife and goes off to make his fortune.
Eleven years later - August, 1884 - Rupp returns to the town of Coldiron, Cold County, Texas. With $17,000 dollars made from buffalo hunting he is looking to resume his married life. On the way he stops by a deserted camp where a fire is still blazing and a pot of coffee is bubbling away. He sits down and helps himself to the coffee as three men ride up. What Rupp has failed to notice is that buried in the fire is a branding iron. Accused by the three men of cattle rustling Rupp is branded with the iron and his money is taken.
With his burns tended by a local small rancher Rupp rides into Coldiron looking to get his money back and, at the same time, get his revenge on his torturers.
The town has changed, Jessie Rupp's aunt has died and Jessie has inherited the house and opened up a dress shop in the main street. The meeting between Rupp and his wife is felt when she rejects who she sees as a dirty, smelly saddlebum - there is no recognition. She confides in her husband to be, the banker Brooks Durham, about the stranger who seems to be stalking her.
It takes a while before it registers with Rupp that he is considered legally dead.
However, it is Brooks Durham along with the foppish Johnsy Hood and the alcoholic ranch foreman Elwood Coates who had branded Rupp and taken his money.
As the tension rises Elwood Coates seeks the company of an imaginary friend The Little Whiskey Man - an interesting study of a man's mind disintegrating.
The book builds to the climax as promised by the logo on the book - 'The people of Coldiron would never forget The Night Of The Tiger'.
The book concentrates on the central characters rounding them into real people and the reader is drawn into the story as though it is an eyewitness account of real events. There are no good guys and bad guys in this book - and Al Dewlen uses this to good effect as while the reader can relate to Rupp we see the others in their own light.
'The Night Of The Tiger' was made into the movie 'Ride Beyond Vengeance' with Chuck Conners as Rupp, Michael Rennie as Brooks Durham, Bill Bixby as Johnsy Hood and Claude Akins as Elwood Coates. The movie is worth seeing just for Clauds Akins portrayal of Elwood Coates especially in the scene where he talks to The Little Whiskey Man on whose advice he acts.
The movie was the first western to receive an 'X' Certificate in the UK.
Posted by Ray at 22:41

Sounds like a book worth hunting out. Is this a case of the book being better than the movie?

Steve - definately worth getting a copy - it is a lot better than the film.

I too will have to locate this one.

Ray, I may never find this book to read but I sure as heck enjoyed your review. Thanks.

If anyone's interested, I just found a copy of Dewlen's The Night of the Tiger--a First Edition hardcover w/ good dust jacket--from a sale at my local library. But it wasn't a library book--no markings or labels.

If anyone would like to own it, drop me a note. I sure wouldn't mind getting a few bucks for it, plus postage, which would be under $3. I'm not a book dealer, just a guy who can't pass up a book sale.

E-mail me at atty.charles.larson@clearwire.net
And catch my blog The Rutabaga Harvest Law Journal (nothing to do really with rutabaga or legal writing) at www.jdchuck.blogspot.com

I Just found a copy while cleaning the attic in my parents house. Hard black cover 1956 worn but good condition. If anyones interested, sitto5472@comcast.net