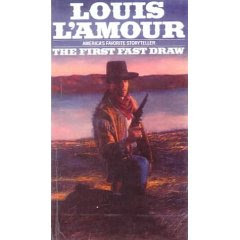 Louis L'Amour is not a forgotten writer. There was a time when shelves were filled with his books that other writers were crowded off. Very much the same as Mozart takes up more space than any other classical composer.

The First Fast Draw was the first western by Louis L'Amour that I read and it made an impression. I borrowed it from a friend and once read I was loathe to part with it - but I had a bubble gum wrapper that he wanted so a deal was struck.
I not only got a better deal - the book cost him 2/- (10p) and the bubblegum cost 1d (work that one out) but I grew to like the novels of Louis L'Amour.

The novel concerns the return to Cass County in East Texas of Cullen Baker. He hides out in the swamps of the Sulpher River bottoms and attempts to farm his father's land while making a stand against the Reconstructionists and the carpetbaggers during 1868.
Cullen Baker is a marked man for there are many who dislike him enough to want him dead but he does have friends in the shape of real life character Bill Longley as well as some who are fictional.
The story is told in the first person so we see the world from Cullen Baker's perspective. What the reader gets is the iconic hero defying the odds against one form of tyranny and the conclusion is not so cut and dried. Nevertheless the book was a good read and still is.

BUT...........
Cullen Baker was a real person who was born in Tennessee in1834 and died in Cass County, Texas in 1869.
It does not matter where you go on the 'net the real Cullen Baker was a deserter from the Confederate Army, a renegade, a thief, a rapist .... the list goes on and I come to the conclusion that he was the meanest kind of un-herolike character.
The odd book review that I come across is, in the main, derogatory towards both Louis L'Amour and the book. And don't forget that this is one of my favourite westerns here.
As I delved deeper into the story of Cullen Baker I discovered that certain key parts gelled and I came to the conclusion that some of the reviewers had not read the book - sure, they had opened it and read the words but had not taken in the contents.
Cullen Baker, the real one, was regarded as psychotic and suffered paranoia. Switch to 'The First Fast Draw' - ' A cold black rage seemed to overcome me and I did not know where it came from'.
Fact: Cullen Baker married Martha Foster (no relation - not as far as I know anyway). She was his second wife and history does show that Cullen Baker was settled for a while until she died. He went off the rails and then turned up in Cass County and proposed to Martha's sister, Belle, but she turned him down as she was going to marry the local schoolmaster, Thomas Orr.
Thomas Orr was a friend of one of the Foster cousins - one that Cullen Baker had had a run-in with before - so no love lost there.
The First Fast Draw: Cullen Baker meets up with Kitty Thorne who shows concern that he has returned. He confuses friendship with love and when he asks the question she says that she is going to marry her cousin's friend, Thomas Warren - the local schoolteacher.
Fact: It is said that William Foster, Martha and Belle's father, laced a bottle of whiskey with strychnine which Cullen Baker and Matthew Kirby drank. They were later found lying in the grass amongst some trees where Thomas Orr and some others shot them.
Question: No one has come up with a reason why William Foster would do such a thing - so where did that come from?
The First Fast Draw: Thomas Warren shoots Matt Kirby and another gang member - get the picture?

Sure, Louis L'Amour used some poetic licence and romanticised the story - but then he wasn't the first nor will he be the last. One thing is certain though - when the book is read then for the most part the facts are there.
The interesting thing that I found was that a lot of what has been written about Cullen Baker can be traced back to a book that was written in 1870 and this original life of Cullen Baker can be found in Washington D.C. The author? Thomas Orr. A man with no axe to grind - then.

Finally, was Cullen Baker The First Fast Draw?
Eugene Cunningham: Triggernometry - 1941 - "of the long line of Texas gunmen, for - even more than Cullen Baker - (Bill) Longley was Number One of the modern gunslingers."
Posted by Ray at 22:33

You definitely got the better end from that 'bubblegum deal'. Informative review of the L'Amour book. I recall you've mentioned TRIGGERNOMETRY before. I'll have to get it after I finish reading Cunningham's TEXAS SHERIFF. Btw, good interview on Black Horse Express, and thanks for the BTAP plug.

This was the first book I read by L'Amour too. I did know Cullen Baker was a real person at the time but knew nothing about him. Great to be able to rectify that by reader your informative post Ray.

David - Thanks for looking up my interview and , yes, whenever I can I'll plug BTAP.
I think the bubble gum wrappers were from 'Bazooka' and the inside was like a fact file comic - there were 5 'rare' numbers. I had three of them though I didn't collect them. Just having them could 'buy' almost anything.

Steve - I was about 14 when I first read The First Fast Draw and I knew nothing about Cullen Baker.
As I get older I can see the darker side of the character.

I'll give you a three bubblegum wrappers for that one.

Fantastic review, Ray! I love it when other people write about L'Amour, especially when they write about him well, as you do. Especially enjoyed the historical background.

By the way, finally added you on my blog list!