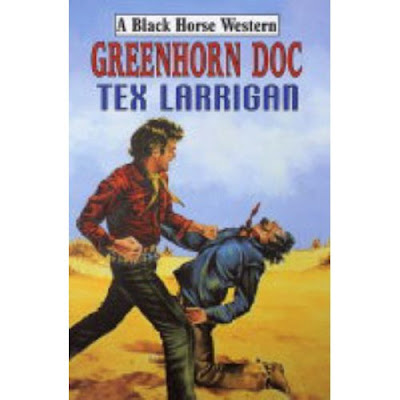 In November 2003 the writer known as Tex Larrigan died.

Tex Larrigan was the nom-de-plume of a white haired lady who wore large framed glasses who's name was Irene Ord.

Irene was born in Darlington, Lancashire in 1920 the daughter of a draper. She married and had five children. It was those children who would set her on the writing path for she told them bedtime stories that she would write down as her children would want to hear those stories again.

From this Irene began to write a column for The Northern Despatch newspaper .

Her first novel, DESERT ROMANCE, was published in 1977 and went on to write about 30 novels under the names of Emily Wynn and Kate Fairfax. When her publishers decided not to publish anymore of her historical bodyrippers she found guidence from Albert Hill (better known as Black Horse Western writer Elliot Conway) who suggested that she write a western.

Both Albert Hill and Irene Ord had been founder members of the Darlington Writers Circle.

In 1989 her first western 'BUCKMASTER' was published under the name of Tex Larrigan by Hale's Black Horse Western brand.

This was a story where Buckmaster, riding the Oregon Trail, comes to the aid of a woman who is looking for revenge against her ex-lover who has seduced her daughter. Told in the first person it is one of those times when the reader becomes convinced that it could have only have been written by a man and for some years I have been under that illusion until I discovered her identity in The Directory Of Twentieth Century Western Writers.

It is said that Irene could turn out a book in four weeks. Ideas just kept coming to her so that in the period 1977 to 1986 she had 28 published books to her name.

Irene had never been to America. All her books were a combination of good research and a fertile imagination. In 1998, with Albert Hill, she went to Wyoming for a BBC tv programme. Here she walked in the footsteps of Butch Cassidy and The Sundance Kid, visited the site of Custer's Last Stand, fired a gun and rode horses. She came back with enough material for several books.

Eventually, her output was reduced to about two books a year and, on her death, left two or three manuscripts that were published after her death.

Tex Larrigan writes a good page turner with well drawn characters that, for me, makes these books very collectable and there are many on my bookshelf. Irene, known as 'Tex' her nickname, is a talent that has to be read.

A few years back I put together an article on Irene Ord that appeared complete with a picture of the lady in the old Black Horse Express. One mystery I never got to the bottom of was the identity of her friend. He wrote/writes as Elliot Conway. Like Ms Ord he lived in Darlington . . . but who is he? "Albert Hill" is a district of Darlington, which has to make it suspect as his real name. Any answers out there? With his long career, he deserves an article of his own in Black Horse Extra.

I agree and I've dropped Elliot Conway a line asking if he was prepared to do an interview.

This was an interesting post - love that pen name for a sweet old lady. It's amazing the variety of people writing the black horse westerns.

Ray, I'm starting an e-zine and have several contributors lined up. I will be posting more info on it this Thursday. I remember that incredible story you wrote for Patti Abbott's contest. If your interested I would love to publish a story of yours. My e-mail is paladin-1@hotmail.com and I will have more details this week on Pulp Writer.