ALL GUNS BLAZING by Doug Thorne 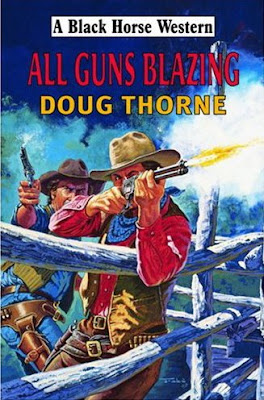 Due for publication on the 30th November 2008 by Black Horse Westerns (Robert Hale Ltd)
Cal Hennessy was on his way to meet up with old friend Billy Dixon at Adobe Walls. The plan was to catch up on each other's news over a beer or three. But before he got there he ran into two dead men and a bunch of blood-hungry Commanches. Trouble was brewing on the staked plains of Texas and Hennessy, who was no stranger to it, quickly found himself in the middle of a full scale Indian war. But gun swift though he was, would even he survive the killing to come?
This new novel comes from the writing talents of Black Horse Western writer Dave Whitehead and German western writer Alfred Wallon.
So, how did this collaboration come about?
Dave Whitehead wrote to me and said: ' Alfred and I had been planning to collaborate for a while. We're both great admirers of Ben Haas who wrote westerns under the names of John Benteen, Richard Meade and Thorne Douglas. In fact that's where we got our pseudonym Doug Thorne.
The plan, initially, was to write something similar to Haas's JOHN CUTLER stories about a professional animal hunter. But then Alfred remembered that he had an old manuscript entitled 'The Trap Was Called Adobe Walls' that had been translated into 'German-English'. I offered to smarten up the translation for him but, by the time I finished, we had a book that was down to only 80 manuscript pages long. I suggested that Alfred write some additional material, but he countered that with a suggestion of his own - that I write the extra material and incorporate it into the story thus making it a true collaboration. I did exactly that.'
Alfred Wallon also wrote to me about this collaboration and said: ' When I started to correspond with David we soon found out that we had something in common in our love for the same western authors. It was not only Ben Haas but Matt Chisholm and George G. Gilman. Even our way of telling a story seems to be similar. So that was a good starting point for anything further.
I always prefer stories based on historical facts - with a lot of realistic details. The American author Terry C. Johnston is one of those that I admire - I have all his books.
If two authors share the same interests - a collaboration is always something good - especially when they both believe in what they are doing.
David did a very nice job in doing the detailed research about Adobe Walls and he brought that period to life. When you read about what happened around the old Spanish fort you see everything before your eyes.'
In Alfred's opinion ALL GUNS BLAZING is evidence of good collaboration.
Alfred Wallon was born in a small village in Germany in 1957. He had learned to read before he went to school and was soon into westerns. He watched TV series like 'Bonanza' and 'High Chaparral'.
He is the writer of the German western series 'RIO CONCHOS' and writes with a visual style that, he hopes, will encourage younger readers to the western genre. He quotes fellow German western writer G.F.Unger who says that the western is not much different to the sci-fi and fantasy books that the younger generation read - it's only the weapons that are different.
As Alfred says: ' You only have to show them what you are seeing - the landscape, the killing of the buffalo, the plight of the Indian tribes and the struggle for survival at Adobe Walls.'
So will there be any more collaborations between Dave Whitehead and Alfred Wallon?
Dave Whitehead says: ' Our second, ALASKA HELL, is about half completed at the moment and, with a bit of luck, there will be more to come.
It's an interesting collaboration - a German western writer and a British western writer writing together in what is, basically, an American art form.'
A final word from Alfred Wallon: ' The American writer, William W Johnstone, summed up his view of the western in a forward to a book - "The west lives on. And as long as I live, it always will.....". Need I say more.'
Posted by Ray at 09:26

More interesting info, Ray, on a much talked-about BHW. For those who might not know, can I add that David's and Alfred's story about the book is featured in the current online Black Horse Extra ? There are also pictures there of David, Alfred and Ben Haas.