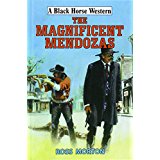 Thanks for your generous review, Ray. It's much appreciated! Yes, you're right, the book was conceived as a homage to that western, though in the main making the Mexicans the heroes, instead of the gringos.