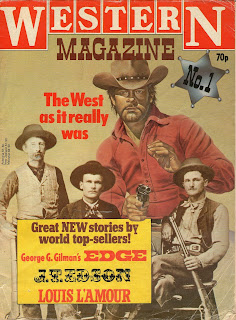 'Man's love affair with the West mirrors his love of life itself.'
The opening words written by editor Dennis Winston marked the first edition of the Western Magazine in October, 1980.

The magazine was the brainchild of Dave Whitehead and Mike Stotter - fans of the western from the moment that they were born. Together they had played and made western home movies - they lived the dream in the heart of London's East End.

Between them they had created the George G. Gilman Appreciation Society and knew all the group of writers that were known as the Piccadilly Cowboys. Anyone who has read any of those westerns will know that this pair have turned up as bad guys, inept good guys - you name it they have been there.

Angus Wilson (aka William S Brady amongst many) suggested that Dave and Mike pitch their idea for a magazine to some of the leading publishers. IPC Magazines liked the idea and the magazine became reality.

The front cover of issue 1 shows a photograph of three Texas Rangers against a David McAllister painting.
Over four issues there were new short stories featuring Edge, Adam Steele, Herne The Hunter, Morgan Kane, McAllister, Breed, Bodie The Stalker, Hart The Regulator, and the return of Sudden together with new stories from Louis L'Amour, Will Henry and J. T .Edson.
Articles covered every aspect of the west from the harsh life experienced by 'The Wives' to incidents that involved the likes of Commodore Perry Owens, Tom Horn and many others. The life and times of the American Indians were studied.
No subject was left out as reviews of books, movies and music were reviewed alongside articles about how true life characters like Wild Bill Hickock and Jesse James have been portrayed in movies.

In the back page of Issue 1 there is an interesting article about Ralph Fisher, a rodeo clown who used buzzards to distract bulls away from fallen cowboys. The picture alongside shows Ralph with a buzzard sitting on his head - inspiration for Johnny Depp's Tonto?

Going through the adverts shows how deep we Brits were in to Westerns - guns, hats, gunbelts - all the paraphernalia are there. £16 would buy you a Derringer - but £139 for a Winchester. Nowadays these ads along with the cigarettes would be banned.

As for the instigators both David Whitehead and Mike Stotter went on to become western writers both under their own name and a few others.
Even as I write Dave Whitehead has ventured into the world of publishing. Piccadilly Publishing is bringing back the likes of Herne The Hunter, Crow and Bodie alongside new western novels that includes the Iron Eyes series by Rory Black.

Dennis Winston got that opening to his first editorial right - to love the West is to love life.
Posted by Ray at 12:35

No. 1 had a nice cover. The Texas Rangers are always a good subject. Too bad the magazine folded so soon.

Karen - one question is why?