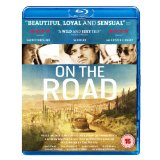 No one ever said that it would be easy to bring Jack Kerouac's iconic novel of the Beat Generation to the screen.
Jack Kerouac would have liked the idea of himself playing Sal Paradise with Marlon Brando as Dean Moriaty - but that never happened.
Then Francis Ford Coppola stepped onto the scene for he too wanted to film the book with the idea of casting Brad Pitt and, later, Colin Farrell in the Moriaty role and Ethan Hawke as Sal. An interesting combination.
In the end it came down to Walter Salles directing Jose Rivera's script; the stars Garrett Hedlund as Dean Moriaty, Sam Riley as Sal Paradise and Kristen Stewart as MaryLou.
The movie boasts a pretty good cast that includes Amy Adams, Kirsten Dunst and Viggo Mortensen.

The opening line of the film doesn't (I say in a pedantic way) correspond with that of the books. In the past that sort of deviation means that someone is basing the movie on the book.
That bias did not last for long though as the essence of the autobiographical novel soon asserted itself.

As far as I know the movie was not released in the UK and I only discovered the fact that it was coming out on dvd was because I wanted to know when it was coming out - after all the movie of a book that was so influential in my youth was of great interest.

However, I came away from the movie a touch confused. It was one of those movies that worked - yet didn't at the same time.

Garrett Hedlund brought Dean Moriaty to life. Drugs, sex and jazz - live now, pay later; freewheeling rebel and take responsibility for nothing. Never tied down to one place - never mind the odd woman/wife and children. Life is for the living.
Dean Moriaty dominates this movie just as that character did in the book.
Sal Paradise on the other hand plods through the movie more as an observer, note taker and narrator than the actual participant of the book. With his solo road trip the movie comes up with a series of snapshots rather than the reveal aspects of Paradise's character. An example is the flat bed truck full of young men and the celebrated 'piss call' - memorable from the book but dismissed with a vision of a man peeing from the back of the truck because he hadn't been when the piss call stop had been made.
MaryLou is a beautiful free spirit - but, sometimes, just there for decoration - even then her facial expression tells a story.

At 124 minutes I expected a lot - but there are flat moments and repetitive scenes that slow it down. Once having established the drug and drink scene I didn't think it necessary to keep producing lengthy close up are lengthy closeup. With a little more thought more of the book could have been brought to life.

Sam Riley had been pretty good as Pinky in the 'Brighton Rock' re-make so I did expect him to bring a rounded Sal Paradise to the screen. Given the script he did a good job.
After seeing Kristen Stewart play Joan Jett in 'The Runaways' - yes, a good piece of casting for the role of MaryLou. Again there were script limitations.
Garrett Hedlund - he dominated the screen as Dean Moriaty. The downside is that the movie is dominated by this one character.
Moriaty was the role model - a flawed role model. Paradise does live in his shadow for Moriaty is the man that he wants to be. Until Paradise begins to see the cracks and flaws in Moriaty's character and Sal discovers his own true self.
None of that comes through in the movie. In the last five minutes of the film Dean Moriaty turns up as a down and out, whining hobo that a well off Sal Paradise dismisses.

'On The Road' is one of those hit and miss movies (more hits than misses - just) that makes me both like and hate it.
This is a US, Canadian, French, Brazilian and UK (Film 4) co-production.
On the plus side it is better than the last attempt to film a Jack Kerouac novel - 'The Subterraneans' - that starred George Peppard.