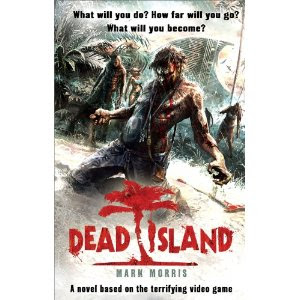 In the beginning there was the trailer that millions tuned into. Dead Island looked to be the must have game of the year. Both the game and the novel were released on the 9th September and sold out on the day. Telephoned 'Game' and was told by that the game had not been released.
Seven days on and without anymore copies of the game to be found in stores or on-line I began to think that the hype was in full swing. I could imagine that the distributors were sitting around laughing as they made gamers hungry for the game.

Fortunately, Bantam have issued the novelisation of the game by Mark Morris. And a good job too for, having now read the book, I don't really need the game.

So four heroes and heroines are off on their hols (well, three are) on the paradise island of Banoi. One hit wonder Sam B is ready to make a comeback; ex-NFL footballer Logan is on holiday and Sydney cop, Purna, is taking time out after she has killed off a child abuser. The hotel receptionist, Xian Mai makes up the fourth. The thing they have in common is an immunity to the virus that is about to turn the population of Banoi into zombies.
It is a gory fight for survival as each character tries to deal with an unreal scenario. Zombies only exist in games - right? Each of the four have to come to terms with a very real enemy - and it turns out that zombies are just a minor problem.
I loved the moment where they come across a book rack that has Nevil Shute and Harold Robbins novels.

Mark Morris has produced one of the best game novelisations to date. He lives in Yorkshire. His first novel 'Toady' was published in 1989. Since then he has written sixteen books including four for the 'Dr Who' series. He is now working on the novelisation of a 1970s Hammer film 'Vampire Circus'.
Posted by Ray at 20:45