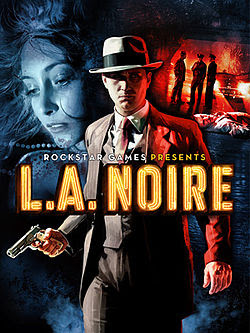 If ever there was an arguement for getting a games console then this is a good one.
L.A.Noire is set in Los Angeles in 1947 - and a lot of work has been done to re-create the downtown area of the Los Angeles of the period.

The creators are Rockstar, the company behind Grand Theft Auto series and Red Dead Redemption. This time it is the Australian branch, Team Bondi, behind this game that has a true sense of period.
There are excerpts from radio programmes of the day that include Jack Benny at his best. A soundtrack that boasts Lionel Hampton, Thelonious Monk, Dizzy Gillespie, Dinah Washington and a 'Pistol Packin' Mama' from Bing Crosby and The Andrews Sisters - there has to be a sountrack album.
This is the noir of Bogart, Cagney and Robinson with a dash of Greenstreet and Lorre neatly packaged for a modern audience in the same way that they did with 'Red Dead Redemption'.
Storyline is simple - through a graphic back story you get the feeling that Patrolman Cole Phelps has issues resulting from his actions in the Pacific theatre during the Second World War and lies behind his reasons for joining the L.A.P.D.
Starting as a patrolman the idea is that Phelps climbs the ladder until he becomes a fully fledged detective. This is done via police chases and shootouts that are not as groanworthy as you would think. There is, also, the investigative procedure. This is puzzle solving at its best for crimes have to be solved to make progress.

This is by far the longest game that I have encountered - three discs compared to the usually one - such is the complex nature of both the storylines and the side quests.
This is not a game for kids - not those looking to shoot everything in sight or demolish vehicles and pedestrians in their path. This is very much the game for grown ups or for those who can take the time to think things through.
I would like to see this as another success for Rockstar but I do have reservations based more on the modern trend towards violent online gaming.
Posted by Ray at 16:56