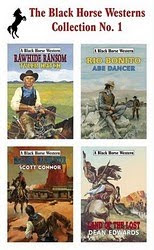 Well, what a day over at The Tainted Archive blog where, once again, the emphasis was on the awareness of the western genre in general and to promote the ebook - even encouraged to buy one or take up the offer of a freebie by Joanne Walpole 'Raven Dove'.
I did buy some westerns yesterday notably Herne The Hunter 22: Wild Blood so that I now have the complete set. Not an ebook, though, as this series has yet to be included.
Still I enjoyed the day that had a piece by several Black Horse Western writers like Chap O'Keefe. Charles Whipple (aka Chuck Tyrell) on how ancestry, childhood and a town can influence a writer. An interview with Chris Scott Wilson and Edge creator George G. Gilman.
But the highlight for me had to be Edward A. Grainger's short story 'Melanie'. This was a tight taut story about child abuse and featured Cash Laramie (who made his debut in the Express Westerns anthology 'A Fistful Of Legends'). It is a story that could be told today and underlines just how much nothing has changed over the centuries. I very much hope that this story will appear in the proposed Cash Laramie anthology.

In some respects I think that ebook readers are a gadget too many. On the other hand if it gets people back into the habit of reading it has to be a good thing. As Chris Scott Wilson says in his interview at least this way an author's book will never go out of print.
I have downloaded some books - the last six Edge books that are only available this way. But I do find that this way of reading a book a touch impersonal. Nor, having read a book, can I toss it over to my wife or one of my children.
I have another objection to ebooks. There is a certain book out there that I would like to read but it doesn't matter where I go I can either buy a Kindle version or get the message 'Download now'. That sounds like a dictatorship to me - I can only read a book if I download it. If that is the sound of the future then there are a lot of people who may well miss out on a good book. Surely, unless I am missing something, there should be a paperback book option.

Still Wild West eMonday has weaved the magic again and flown the flag for the western. And that is all that matters.
Posted by Ray at 12:28

Many thanks, Ray. In addition to the thirty comments on the blog I'm receiving several e-mails of congrats for Melanie. I'm humbled to say the least.

I will quote you on Pulp Writer in a few minutes.